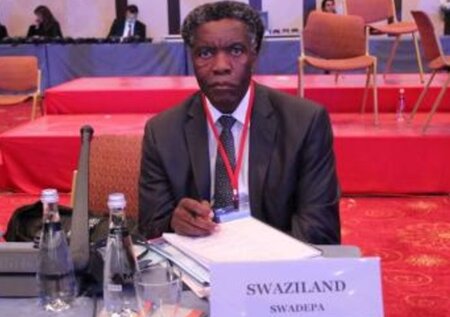 The Socialist International pays tribute to Jan Sithole, former Member of Parliament for Manzini North, Eswatini, and President of SI member, the Swaziland Democratic Party, SWADEPA, who passed away this month, aged just 67, after being taken ill.

Jan Sithole became motivated to work in the trade unions in the 1980s, after he endured mistreatment by South African management under apartheid whilst working as shift operator in a paper plant. Sithole’s revolt against his exploitation however resulted in a disciplinary inquiry in which he was vindicated. He gained admiration and respect from workers in the country and became the Secretary General of the Swaziland Federation of Trade Unions (SFTU). Throughout the 1990s he continued to campaign for the rights of the people and led union strikes and protests, where he fought for such basic essentials as water and electricity. He was frequently arrested for his activities, and was threatened and detained by authorities many times, enduring both kidnap and attempts to deport him from the country. None of the threats against him diminished his motivation to campaign for the fundamental rights of the Swazi people.

Focusing on his goal for a democratic future for Eswatini, then Swaziland, Jan Sithole entered politics after working in the SFTU for 25 years. His objective was not to abolish the monarchy, but to bring true democracy, jobs and equality for all, freedom of speech and respect of human rights in the country. He recognised that corruption and poverty contributed to a skewed distribution of wealth, and knew that the ban of political parties must be overturned in order to achieve a parliamentary democracy with a bill of rights that meant such laws that existed to silence criticism of the monarchy could not continue to be imposed.

He was elected as an independent candidate to the House of Assembly in October 2013. Whilst some questioned how his position in parliament could help, he believed it gave him a greater platform to bring about change and a multi-party democracy and never wavered in his commitment to the people. In the ensuing years he continued to campaign, writing political columns and in contact with international political figures. Jan Sithole began his active engagement with the Socialist International in 2013 and the following year, in 2014, SWADEPA was accepted as a member of the organisation, a decision subsequently ratified by the XXV SI Congress held in Cartagena, Colombia, in 2017.

A tireless activist and politician, Jan Sithole will be long remembered in Eswatini’s history. Despite the threats he suffered, he never faltered in his vision for a free and democratic Swaziland. We extend our deepest sympathies to Jan’s family, the SWADEPA party and to all his political comrades.